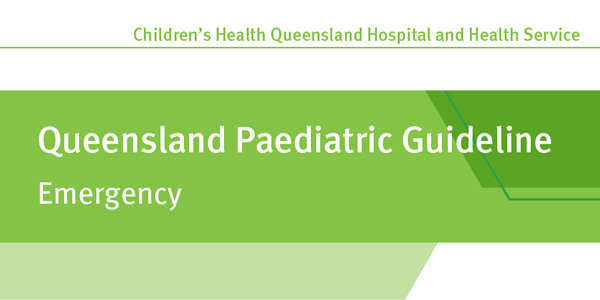 This document provides clinical guidance for all staff involved in the care and management of children aged one to five years presenting to an Emergency Department (ED) in Queensland with a wheezing illness.

Wheeze is a continuous high-pitched sound with musical quality emitting from the chest during expiration,1 with increased work of breathing.2 Pre-school wheeze is also referred to as reactive airways disease. Wheeze is a very common ED presentation in children that is usually caused by intercurrent viral infection or other environmental triggers. Evidence suggests that up to 30% of children will have at least one episode of wheezing prior to their third birthday,3,4 over half will have more than one episode5 and 60% will stop wheezing by six years of age.

The pathology and natural progression of wheezing illnesses in pre-school children is variable and not fully understood. The term asthma is not used to describe a wheezing illness in pre-schoolers as there is insufficient evidence that the pathophysiology is similar to that of asthma in older children and adults.1

The type of wheeze a child experiences can change over time. Pre-schoolers commonly experience wheeze during discrete time periods, often in association with clinical evidence of a viral infection (such as rhinovirus, RSV, coronavirus, human metapneumovirus, parainfluenza virus and adenovirus) with symptoms absent between episodes. Repeated episodes tend to occur seasonally, and it usually declines over time disappearing by six years of age. This is known as an episodic viral wheeze.

Less commonly, a pre-school child can experience a multi-trigger wheeze. In such cases symptoms also occur between acute exacerbations. Viral infection is a common trigger but other triggers include tobacco smoke, allergen exposure, mist, crying, laughter and exercise.

Risk factors for a future diagnosis of asthma include:

Several clinical predictive indices for future risk of asthma have been developed based on combinations of the presence of atopic manifestations, indirect evidence of airway inflammation such as peripheral blood eosinophil count, and severity of pre-school wheeze.2 The ability of these tools to identify those who will develop asthma is poor (positive predictive value (PPV) ranging from 44 to 54%). However, the absence of known risk factors can be useful to reassure parents of a lower risk of future asthma.

The purpose of assessment (history taking and physical examination) is to:

Studies have shown while physicians can accurately identify wheeze, parents may not be able to do so.2 Ideally, the presence of a wheeze should be confirmed by a clinician.

All health professionals have a role in advocating for their patients by advising parents about the increased risk of wheezing associated with parental smoking.

The child should be assessed within the time frame recommended by the triage category. General appearance, mental state and level of respiratory distress are the most important markers of illness severity.7 Signs of respiratory distress in pre-school children include accessory muscle use, abdominal breathing, intercostal recession, subcoastal recession and tracheal tug.

Oxygen saturation (Sp02) is effectively measured in using pulse oximetry. Poor gas exchange and decreased saturations may be a result of severe airway obstruction due to bronchoconstriction, airway oedema and/or mucous plugging.8

Wheeze is due to narrowing of intrathoracic airways and expiratory flow, irrespective of the underlying mechanism. Less commonly, there are alternative reasons for a child to wheeze. Consider further investigation if assessment (history and examination) identifies as any unusual features which may allude to the differential diagnoses outlined in the following table.

Investigations are not routinely recommended for a pre-school wheeze diagnosis.2 While viral PCR testing may be useful to reassure the family it is not recommended as will not alter the management.

Refer to the flowchart for a summary of the recommended emergency management and medications for a pre-school child with a wheezing illness.

Management comprises of medications targeted at relieving acute bronchospasm, alleviating lower airway inflammation, and providing respiratory support in the form of oxygen and non-invasive ventilation. Steroids are not indicated in pre-school children who present for the first time or infrequently with a mild to moderate wheeze.

Repeated clinical assessment following each treatment is essential to determine the change in clinical symptoms (improvement/no change/deterioration). This should be well documented in the patient clinical notes.

Salbutamol (short acting inhaled beta2 agonist) is recommended for all pre-schoolers with wheeze.9

Monitor oxygen saturations continuously if administering Salbutamol more often than every two hours. Bronchodilators may produce a paradoxical effect in children with underlying structural abnormalities such as bronchomalacia or tracheomalacia. 10

MDI and spacer vs nebuliser

How to use a spacer

Stretching the time between Salbutamol doses should be based on an assessment on the child. This should be done in collaboration with the child and caregiver30 and include:

Not routinely recommended as there is insufficient evidence to support use.11

Consider for children with severe symptoms following Salbutamol MDI or in combination with Salbutamol in nebuliser reservoir.12

*Metered Dose Inhaler. Always use via spacer. Use mask also if unable to form a reliable seal on spacer.

Steroids are recommended for pre-school children with wheeze with:

Consider steroids for pre-school children with a history suggestive of an asthma phenotype e.g. atopy and maternal family history of asthma.

While the evidence is still evolving, steroids are not currently recommended for pre-school children who present for the first time or infrequently with mild to moderate wheeze.

Some studies suggest that steroids do not reduce symptom severity or the need for hospital treatment in pre-school children with mild to moderate wheeze.8 A large randomised, double-blind, placebo-controlled trial found no significant difference in the duration of hospitalisation in children with mild to moderate wheezing associated with viral infection in those given oral steroids compared to placebo.13 However, a recent Australian study concluded that Prednisone had a clear benefit at reduced length of stay in children with mild-moderate viral associated wheeze.14

The systemic steroid of choice is oral Prednisone/Prednisolone. Studies have shown that Dexamethasone may be a suitable alternative steroid. In a recent paediatric study, a single 0.3 mg/kg dose of Dexamethasone was found to be as effective as a three-day course of Prednisone to Prednisone 0.1 mg/kg for three days.15 However, Dexamethasone suspension is not readily available in the community or non-tertiary hospitals.

Target oxygen saturations (SpO2) and the use of low and high flow oxygen therapy is highly variable depending upon local practice and resource availability. Follow local policies where available.

There is no evidence to clearly define an optimal oxygen saturation (SpO2) target and therefore the threshold for administration of supplemental oxygen for young children with respiratory illnesses. Consensus opinion supports a target of SpO2 of 94% or above. Lower saturations may be tolerated depending upon institutional practice. A study in infants (age less than 12 months) with bronchiolitis showed that a target SpO2 of more than 90% was as safe and clinically effective as 94%.16 This study may influence future practice in other respiratory illnesses. A current randomised controlled trial studying high flow oxygen therapy for children with acute hypoxemic respiratory failure uses a cut off of less than or equal to 92% for the commencement of oxygen supplementation.17

Low flow oxygen should not be given to children for work of breathing in isolation, and the practice of “fly-by” oxygen (i.e. leaving a mask adjacent the patient’s face) is discouraged. Desaturations below the local limit for less than five minutes during sleep with rapid self-correction does not mandate increasing or commencing supplemental oxygen. Nursing staff may initiate supplemental oxygen however, a medical review should be requested at the time to ascertain the cause of deterioration. Oxygen should be prescribed on an oxygen order form as per local practice.8

Continuous oximetry should be performed in children requiring oxygen.

Consider in child with severe/life-threatening respiratory distress who is not responding to inhaled bronchodilators.

Magnesium sulphate is thought to act by decreasing the uptake of calcium by bronchial smooth muscle cells, which leads to bronchodilation. In addition, it may have a role in inhibiting mast cell degranulation, which reduces inflammatory mediators.18,19 There is no clear evidence to support use for the treatment of pre-school wheeze.11

Administer Magnesium sulphate using safety software syringe drivers with a standard concentration of 0.5 mmol/mL. e.g. a 10 kg child, the Magnesium sulphate dose is 0.2 mmol/kg = 2 mmol. This translates to 4 ml of 0.5 mmol/mL solution and must be administered through a safety software syringe driver over 10 – 20 minutes to minimise the risk of too rapid administration and dosing errors.

Salbutamol IV is only recommended for children with a very severe acute wheeze.20

Administer an initial bolus dose and monitor closely for signs of Salbutamol toxicity. Slow or cease infusion if significant concerns. Evaluate the clinical response to this initial dose and consider progression to a Salbutamol IV infusion.

Consider in a child with severe wheeze who cannot tolerate oral medication or has a decreased conscious level.

HFNC therapy may help avoid intubation but can also provide pre-oxygenation whilst preparation for inevitable intubation is underway.

Providing bronchodilator therapy at the same time as HFNC therapy is challenging. A specific circuit (preferred) or a transient decrease to low flow oxygen is required. Where a circuit is not available and the child is too unwell to remove HFNC therapy, a bolus or infusion of Salbutamol IV is recommended.

Potential concerns (access via QH intranet) have been raised regarding the use of HFNC therapy.

NIV including continuous positive airways pressure (CPAP) or bi-level positive airways pressure (Bi-PAP) can also be considered to help avoid intubation or pre-oxygenate for inevitable intubation e.g. child with a normal level of consciousness who is unable to maintain SpO2 greater than or equal to 94% despite oxygen via a Hudson mask with reservoir, or has deteriorating work of breathing with increasing fatigue, tachycardia, and tachypnoea.

The following medications are not routinely recommended in the acute management of pre-school wheeze:

Preventer medication may be considered for children with recurrent episodes of multi-trigger wheeze (MTW). Medication should be prescribed by the child’s General Practitioner or Paediatrician.

Consider discharge for children who meet ALL of the following:

Consider a longer period observation in SSU or inpatient service for the despite looking well for a child with a history of sudden deterioration or admission to critical care.

An assessment of the family’s ability to safely manage the child at home should be done as per the Pre-school Wheeze Disease Education Checklist (QH staff only) prior to discharge.

On discharge a child should be provided with:

Consider admission for child with:

Despite meeting the clinical discharge criteria admission may be considered for the following patients:

Considering admission to a SSU if:

Children who require bronchodilator therapy more frequently than one hourly require vigilant monitoring and regular review by medical staff.30 Unless specifically discussed with SSU medical and nursing staff, the child should remain in the acute assessment area of the ED.

During admission to SSU:

Local practices will dictate criteria for admission from SSU to an inpatient ward. Some general criteria to consider include: